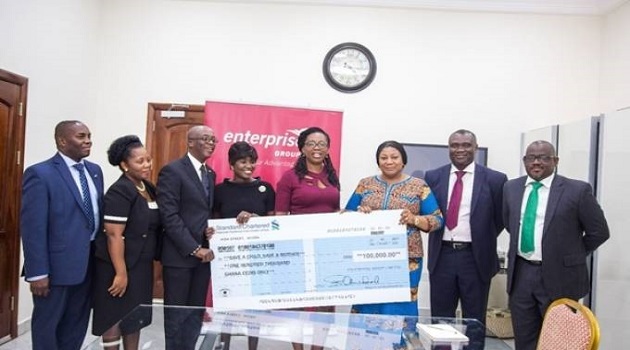 Enterprise Group Limited, a leading financial Group in Ghana has donated cash and insurance cover for the construction of the maternity unit under the “Save a Child, Save a Mother” initiative of the First Lady. The donation breaks down into   a cash amount of GHS 100,000.00 to the fund and insurance cover to the tune of GHS8.4m for the project itself.

The fund, which is an initiative of Her Excellency The First Lady, Mrs. Rebecca Akuffo Addo, seeks to provide relief to babies and mothers at the Komfo Anokye Teaching Hospital (KATH) by building an ultra-modern maternity wing at the hospital.

The insurance cover, which was donated by, the general insurance subsidiary of the Group, Enterprise Insurance, takes the form of a Contractors All Risks insurance policy and protects the building itself from material damage which may occur while under construction. Also the third parties that may be accidentally injured while on the premises during the construction period are also covered. According to Mr Keli Gadzekpo, CEO of Enterprise Group, this is The Company’s way of ensuring that nothing untoward would hold up the project.  This information was made known during the presentation of the cheque to The First Lady by Mr. Keli Gadzekpo.

Mr. Gadzekpo congratulated the First Lady for taking up such a laudable cause, saying that Enterprise was moved by the plight of mothers and children at the Komfo Anokye Hospital, as revealed in the documentary produced by the Multi-media Group. The Company therefore felt compelled to help. He went on to say that this is not the first time Enterprise has reacted positively to a national cry, citing the example of Enterprise’s support to the victims of the June 3, 2015 twin disaster.

On her part, the First Lady expressed her appreciation of the support by Enterprise, “We all know the tagline of Enterprise to be ‘your advantage’, and indeed you are providing an advantage to these women and children and the nation as a whole” she said. First Lady, expressed her deepest gratitude to all who have donated already, stating that there would be more of such public spirited initiatives from her office and encouraged companies and individuals alike to come on board.